How to Erect the Sunset Chart

My sunset chart hypothesis presents a unique and bold idea of astrology. The sunset chart is the foundation by which all charts are carefully thought about, especially the birth chart because the time-of-birth chart lies within the scope of the 24-hour period between sunsets. Most importantly, the time a baby chooses to be born presents a clear picture of his lifestyle when compared between the birth chart and the sunset chart positions of the planets. This process can be seen as a type of synastry chart between the baby at birth and the world at sunset. Additionally, the 24-hour, sunset to sunset, period represents seventy-two years of life.

Early Chaldean observations were made without the aid of our modern astrological trappings such as references to Sidereal time or Greenwich Mean Time. Their initial starting time was Local Solar Time, or more likely, from sunset to sunset. During the 24-hour time frame the star patterns and planetary placement were observed and may have marked a point of departure. My proposal suggests the time of sunset pre-sets the birth as an indicator, a matrix where planetary positions create the standard for the next 24-hour period (sunset to sunset); monthly period (lunar return) or "goal" year (pertaining to relationships between the planets and the Sun).

In a bi-wheel fashion, we rotate the inner chart and as the chart rotates, all planets will aspect their own sunset position as well as the other planets during the following 24-hour period. Consequently, during a lifetime, the timing, quality and influence of major events are based on the planets' (its own synodic) distance described by the Sun’s solar arc and position of the birth chart in relation to the sunset chart.

The charts will be erected using the equal house system in a bi-wheel fashion thereby giving us two charts to work with by comparison.

It is important for you to remember that you must erect your chart for sunset either on the SAME DATE if you were born BEFORE midnight or on the PREVIOUS date if you were born AFTER midnight.


Make a duplicate chart using the equal house system and cast two bi-wheel charts. Print them. Cut out the smaller chart out of one copy so you can turn it within the larger wheel. Each "equal house" is equal to thirty degrees and represents six years therefore, five degrees is equal to one year of life.


The Sun is used as the "focal" point or indicator. Starting from the seventh house, the idea is to simply rotate the smaller chart clockwise through the houses. By the time you have reached the cusp of the sixth house you have reached the age of six years old. If there are any planets in the sixth house that the sun has “conjoined,” note the age of the events that had taken place. Look for other aspects from/to other planets as well.


For example: The Sun at 0 degrees (any sign) on the cusp of the sunset seventh house. Mercury is located 5 degrees in the previous sign in the sixth house. 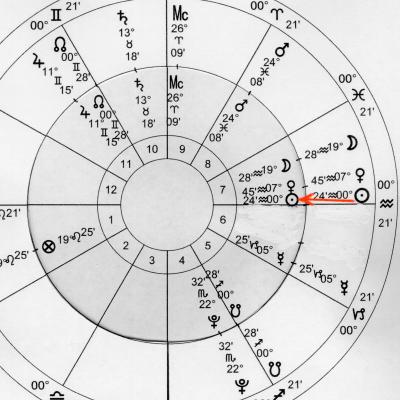 Rotating the inner chart of the bi-wheel and counting clockwise, the Sun is 25 degrees away from Mercury, thus the “age” when the sun reaches Mercury would represent a Sun/Mercury event at five years of age as each 5 degrees represents one year of life. 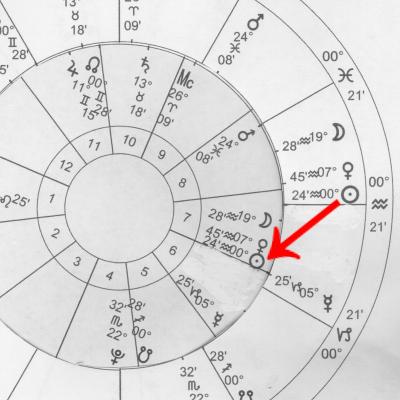 The same procedure can be done with all the planets whenever they make any contact or aspect throughout the entire lifetime.

Note the Sun’s position on the fifth house cusp at the age of twelve. Also, note Mars crossed over the sunset Sun approximately a year previous.

We always read the aspects between the two charts. If you have done this correctly, the Sun will "square the sunset position on the eighteenth year of life (the Sun in the small chart will be "on" the fourth house cusp). I call this aging method the "rogression."

Sunset marks the beginning of all events, and during the following 24-hour period, an individual's time of birth allows astrologers to distinguish between the character traits of the native and all the other individuals born on the same day. It is much the same as the rising sign fine-tunes the nuances of the whole Sun sign. In short, the birth chart is to the sunset chart what the Ascendant is to the Sun sign.

Unless you or your client was born at sunset, each birth chart makes some aspect to the sunset chart. The type of aspect by synastry creates a standard by the planets and quality of life.

By adjusting ancient ideas to today's concepts, we can compare a birth chart to its local sunset position and by rogression find that our entire life is encapsulated within the 24-hour period in which we were born!

• • •
Privacy Policy     •     Terms of Use     •     About Us     •     Contact Us     •     FAQ
© Copyright 2022 Intelligenesis, All Rights Reserved
Your IP Address is 3.87.250.158 on Jan-24-2022
Use of this site signifies your agreement to the Terms of Use. The information contained on this site is from sources believed to be reliable, but has not been verified. No guarantee, warranty, or representation as to the information is made. You assume sole responsibility for any consequences due to error, omission, alteration, or inaccuracy. Any actions taken as a result of the information presented on any pages herein is the sole responsibility of the acting party. All materials, information, and services are for educational and entertainment purposes only.